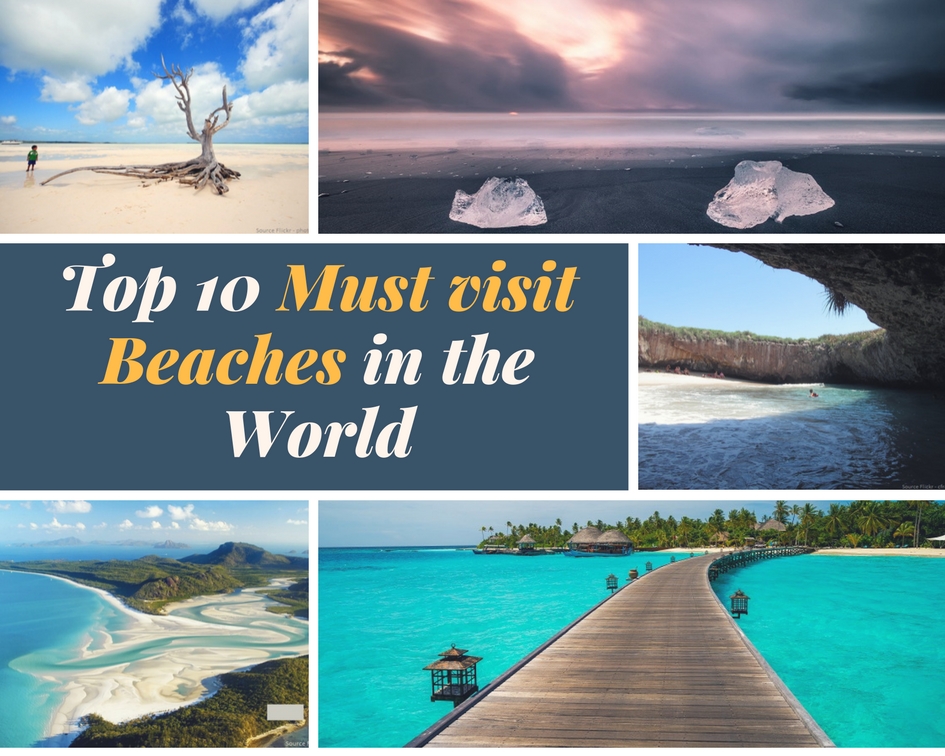 This world is big enough and there is much to explore. Yes I know you are quite a busy in making money and fully dedicated to his job but my friend you have just a single life. Just one, you are not going to come on this beautiful planet again.

Take breaks and travel to an unknown place at least once a year. Now if you have decided to move the basic question is that where you should go? It depends on your choice of destination whether you like to explore rainforests, mountains, beaches, historic places or deserts. Before planning the trip further, make sure that you carry all the travel accessories which can be easily bought from the UK and delivered anywhere in the world by using a parcel forwarding service.

If you are planning to explore one of the best beaches on this blue planet then this post is for you. Here I have compiled a worthy list of top 10 must-visit beaches in the world.

This place is something beyond your imaginations. There’s no match of Playa del Amor on this whole planet that’s why it is featured at first place in this post.
The sea tides under the crater are enough to amaze and fascinate you. This hidden beach is a result of land formations created by the underwater volcanic eruptions.
This place has gained popularity in a very short time and becomes a tourist hotspot. Increasing number of human interference has affected the ecosystem of this hidden heaven on earth a lot and after many campaigns, it was named as a natural park of Mexico.
After becoming one of the best natural parks in Mexico less than 10 peoples are allowed to explore this natural wonder at a time. Playa del Amor is exotic and exclusive at the same time.

Now, this is really amazing and incredible. Instead of sand, this beach is covered with millions of tiny shells, only shells no sand. The layer of shells deposits is up to 10 meters deep and also stretched to more than 70 Kilometers, it is really amazing.
Shell beach is one of the fewest beaches where sand is completely replaced by some other materials. You will find sand on every beach but a beach with only shells is exclusively found in the Shark Bay, Australia.
The shells deposits have become hard as rocks over time and in the late 1900s it was used as building blocks nearby. The Old Pearler Restaurant is one of the fewest buildings of the Shark Bay which is constructed by the shell bricks. The reason behind the pink beaches:

A red colored organ pipe coral found in some parts of Philippines and its crushed tiny particles washed ashore over the years. These red particles got mixed with the white beach over time sand and given completely new pink textured beach sand.

Which are the four pink beaches of Philippines, you ask?

What makes it one of the whitest beaches in the world?

The beach sand deposit of Whitehaven has more than 98 percent of Silica components. Due to its high Silica content deposit, it looks whitest and also does not retain more heat. The powdery consistency of the beach sand makes it possible for the visitors to walk barefoot even on the hottest days.

Walk along with your better half or family to its more than 4 kilometers of whitest beach and explore the amazing coral ecosystem of Whitehaven.

Bermuda is a place enriched with great sea life and marine ecosystem. There are multiple beaches in Bermuda but the Horseshoe Bay beach is one of the most photographed beaches of Bermuda.
The local government and peoples are extremely dedicated towards the conservation of this beautiful beach. This beach is one of the cleanest and well-preserved beaches of Bermuda that’s why it is included in the list of world’s top 10 beaches compiled by Trip Advisor.
Horseshoe beach is perfect for the destination for the entire family. Its rich marine life will provoke you to snorkel and explore the huge verities of fishes and other sea creatures.
Don’t love diving? No worries, you can jog, play games or just have a sunbath on its vast coastline. Go and grab some fresh and exotic dishes from the side stands whenever hunger strikes you.

Harbour Island is a tiny island measuring just 5KM long and almost 1KM wide. With just only 2000+ locals this island is one of the most exotic places to explore the marine life.
The Bahamas is one of the top tourist attractions in the world and it has many gems in its pouch including Harbour Island and more. Roam around the streets with your companions, relax at the beautiful beaches, feed yourself with the local and fresh seafood at the restaurants or food stands, pop into shops have some fun while snorkeling, diving, boating or bonefishing.
The Bahamas and the other Caribbean islands are one of those places which are most affected by the hurricanes, thus December to April is considered the best timing to visit this place.

Maldives is the home to more than 1200 small islands. There are beaches everywhere with the powder like white beach sand and clearest cyan blue water.
Its beautiful coastlines, whitest beaches, rich marine life and exotic hotels are one of the reasons to attract over millions of tourists every year.
These groups of islands are gifted with rich marine life, exotic beaches, sea creatures, schools of colorful fishes, beautiful corals, and pleasantly warm weather. Clearly, it’s really difficult to describe the beauty of these remote islands in few words.

If you like to enjoy your vacations in kind of remote and less populated places then this place will be perfect for you. Radhanagar beach is one of the top beaches of Asia and there is a lot to explore.

Andaman and Nicobar are formed by nearly 572 islands and the interesting fact is that only about 38 of them are permanently inhabited.

Walk along the white beaches or dive into the clear water to explore the sea life of this Indian Territory. The best time to visit Radhanagar Island is from October to February. During these months the temperature stays between 16 degree Celsius to 34 degree Celsius.

When it comes to beaches the name Hawaii struck automatically. Hawaii has a lot of beautiful beaches but I have listed the Papailoa beach on this list of top 10 beaches.
If you want to explore the marine life you should visit this beach. This piece of land is gifted with many endangered species of marine animals such as Hawaiian sea turtle.
Many famous TV serious and movies are filmed in this beautiful beach such as LOST. Best time to visit this place in summer when the sea waves are calmer.

No there are no real diamonds found on the coastline of the Diamond Beach, Iceland. Then why it is called a Diamond Beach?
The broken pieces of icebergs washed away to the coasts and it looks like diamonds in the completely black sand of the beach and sunlight.
This place is one of the most visited destinations of Iceland. Not all great beaches found in the Caribbean where you can enjoy the sun, some beaches such as Diamond beaches are exclusive and best for watching the nature’s activity.

« How To Know The Top Beach Canopy
Oman Tours: Walking In Muscat »