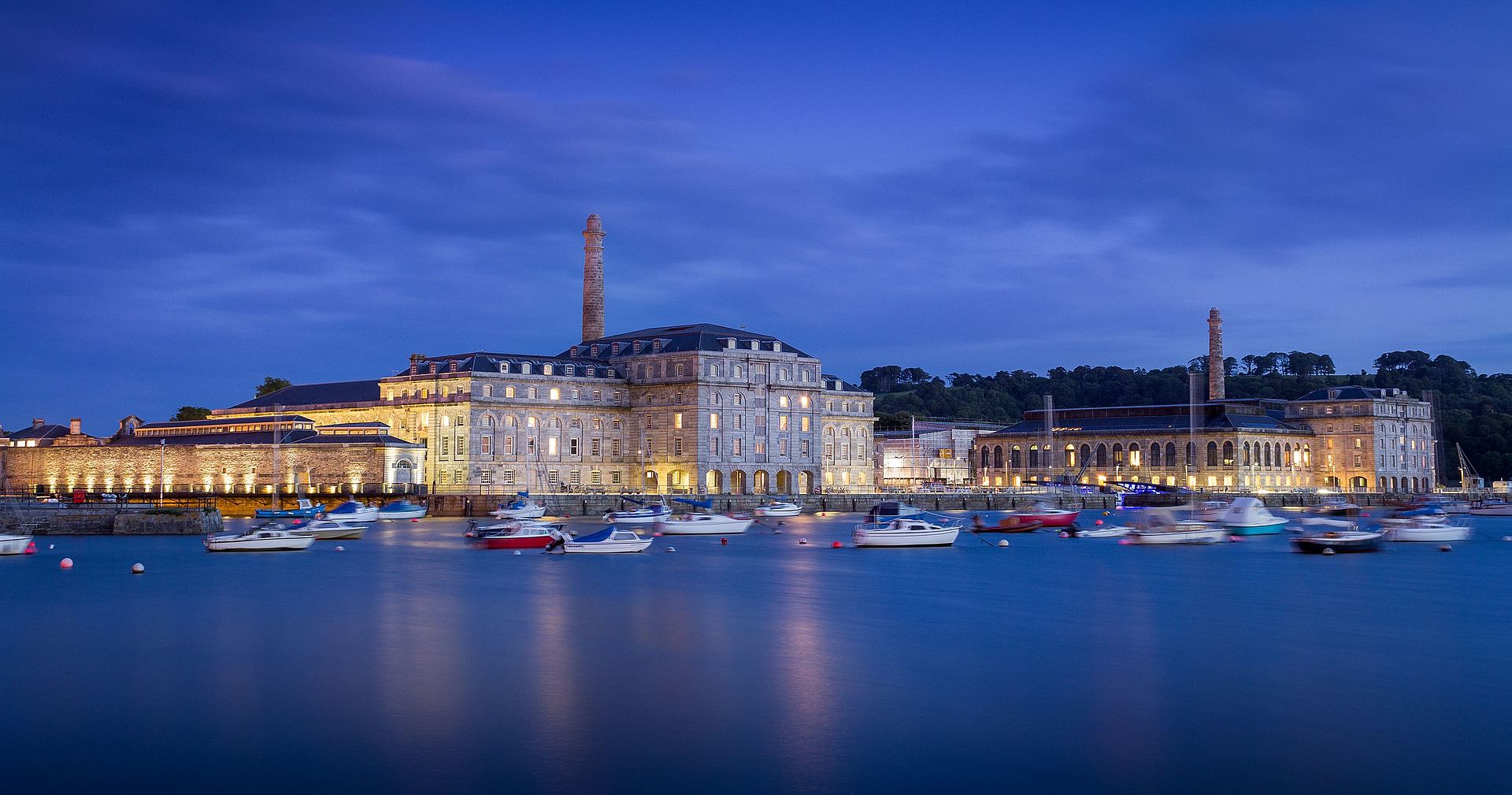 It once supplied the world’s mightiest navy with everything from salt beef and biscuits to rum and gunpowder. These days its upmarket cafes ply their customers with cocktails and calamari.

For more than 160 years these fascinating buildings remained a mystery to the people of Plymouth. They were barred from entering what was essentially a giant food factory, fuelling the Royal Navy in the days when the gunships of the British Empire dominated the high seas.

You could pass by in a boat and marvel at the mighty stone structures but their inner secrets remained closely guarded until the Navy closed the run-down yard in 1992.

The yard was built as a victualling depot to keep the Navy stocked with food, drink, weapons and other essentials. Construction work started in 1825 when Britain was still riding the crest of a wave in the wake of the Battle of Trafalgar. Napoleonic prisoners of war were used to build the huge complex but the project took so long to complete that by the time it opened in 1834, some of its facilities were already out-dated.

The Brewhouse was built to produce 137,000 litres of beer a day but in fact was never used to brew beer at all. The daily allowance of a gallon of beer for every sailor had long since dried up and the Brewhouse was used as a rum store and later as submarine torpedo workshop.

The barrels and kegs used to store and ship the vast quantity of supplies produced at the yard were made in the Cooperage by more than 100 skilled craftsmen. Even fresh water had to be supplied to the ships in barrels along with the rum which was an essential element of the British sailor’s daily allowance until 1970.

The Mills Bakery building housed 27 millstones, driven by two steam engines, and churned out 20,000 loaves of bread a day from 12 giant ovens. The Slaughterhouse, on the right as you pass through the main entrance, was where more than 100 bullocks a day were turned into endless barrels of salted beef.
What a magnificent sight it must have been in those pre-steamship days when the Navy’s timber-hulled, rigged gunships docked at the Royal William Yard to load up for their next voyage.

There’s a tunnel from the yard leading to Firestone Bay which was built to enable lighter supplies to be loaded onto ships out in Plymouth Sound at low tide. Since the developers Urban Splash took on the considerable challenge of converting this Grade I listed ancient monument in 2002, it has been transformed into one of Plymouth’s most fascinating waterfront attractions.

It’s now a mix of apartments, offices and some very inviting watering holes including The Seco Lounge (great for Spanish tapas) and Prezzo which both occupy the ground floor of the Mills Bakery. Even celebrity chef Hugh Fernley-Whittingstall has succumbed to the lure of the great yard. This is the perfect place for a sun downer, with magnificent views of the Tamar and Cornish countryside. The Barbican’s many delightful waterfront bars and restaurants can’t match the Royal William Yard when it comes to the magic of watching the sun set across the water.

A blend of funky and forbidding

Thank goodness the yard is open to the public and has not gone the way of the 18th century Royal Naval Hospital which is now a gated complex manned by security guards. Only those fortunate to live or work inside this unique place can appreciate its historic buildings which we think is nothing short of a crime against Plymothians. These special places are an essential part of Plymouth’s history and local people have a right to enjoy them.

Apartments at the Royal William Yard are available to buy or rent. There are some truly sumptuous holiday apartments with stunning views of the Tamar as well as longer term lets. These apartments are highly unusual in their design and full of quirks due to the tight restrictions placed on Urban Splash when faced with the sensitive conversion of such an historic site.

These massive buildings – constructed of Plymouth limestone, clad with Cornish granite – have retained many original elements of their industrial past including cast-iron window frames, huge warehouse doors and prison-like corridors. It’s an odd blend of thoroughly modern funky apartments housed in a slightly forbidding ancient monument.

The lack of colour makes the place seem rather stark and overwhelming to the first time visitor – maybe that’s why they’ve put those life size white cows in the communal gardens (just to lighten the mood a little!). For an injection of vivid, glorious colour pay a visit to the Brewhouse art gallery. Even if you don’t consider yourself a fan of contemporary art, you’re bound to find something to stir your soul among the incredible abstract creations of resident painter Martin Bush. Martin’s usually around and happy to have a chat about his work…or anything else!

The entire complex is centred around the marina which has 28 moorings with berths available both for residents and visitors. You can pay to berth there from half a day to up to three months. From May to September there’s an hourly water taxi to and from the marina to the Barbican. It’s a handy way to get from one end of town to the other while soaking in the most magnificent views of Plymouth Sound and The Hoe.

You’ll find the Royal William Yard towards the end of Durnford Street in Stonehouse at the western edge of the city. It’s about 20 minutes’ walk from the city centre and Durnford Street itself is well worth a visit, especially the southern end which boasts some wonderful Georgian houses once owned by well-heeled naval families. Sherlock Holmes creator Sir Arthur Conan Doyle worked as a doctor at No. 1 Durnford Street – which is why you’ll see quotes from the great detective set in the pavement here!

You can’t miss the imposing entrance to the yard, next to the Butcher’s Arms pub. It’s a Greco-Roman granite archway topped with a statue of King William IV, the Last Lord High Admiral who laid the coping stone of the sea wall when he was the Duke of Clarence. The stone was secured under water using a cast-iron diving bell. The archway includes carvings representing the coopers, butchers, bakers and other skilled craftsmen who plied their trades here in the days when Britannia still ruled the waves. You add this in your travel tour.

« Some Reasons To Do A French Riviera Private Tours
What To Look Before Planning A Long Holiday Trip? »